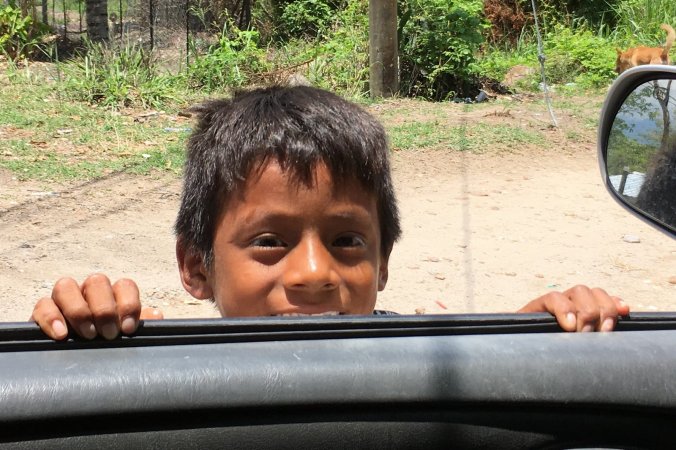 Recently I saw the movie “Lion,” a story about a five year old Indian boy who got lost on the streets of Calcutta. As I sat there mesmorized by “Saroo,” my mind wandered to our hometown in Honduras, and a little boy named “Raul.” Although their stories are quite different, they share similarities in being quite charming, resourceful and have the innate ability to survive. Both boys are from impoverished countries, where living day to day is a constant struggle. They wear tattered clothes, are often shoe less and entertainment is playing in feces filled water. Saroo and Raul live with their mothers and siblings in dilapidated structures without the conveniences of running water or electricity.

Since watching the movie I have been thinking of Raul and wondering how he’s surviving and if I will see him next month when we return to Honduras. I’ll always remember the first day he stood outside our gate, looking malnourished and yellow-eyed, yet still with a radiant smile. He looked familiar and then I remembered I had met him and his sister at the one room school house in the nearby mountain area. Raul explained to me that they were no longer attending school because they didn’t have enough money and his sister (12 years old) was now the sole breadwinner for the family of eight.

I accompanied Raul home, met with his mother and received her permission to enroll him in school. His teacher joined me when I bought his school uniform, shoes and books. I was thrilled to get him off the streets, in a structured/nurturing environment where I hoped he’d have the chance to learn the basics. Unfortunately, my dream was short lived.

On one of my following trips, Raul was right back at our door, explaining he hadn’t eaten in days. He was no longer in school and his sister was out of work because she was suffering from an infection in her mouth. My husband, a pediatrician, was able to examine Dania and give her an antibiotic, and soon she was feeling much better and back to her job. I struggled with what to do with Raul…it was easy to give him food but I knew it was a temporary fix.

We met with some leaders from the community to ask their opinions of what could be done for Raul and his family. They explained that although there was an orphanage in our town, the mother would have to agree and give her permission for the children to move in. Unfortunately, she struggles with alcohol abuse, is without a job and relies on her daughter’s income to survive. They do not have access to resources such as soup kitchens, food pantries or insurance and therefore, an orphanage was out of the question.

Sadly, there’s not much I can do to change Raul’s tragic situation. I’m in his life for only short glimpses of time, but I continue to hope that these moments he is felt loved and that he has the strength to hold on, and survive.