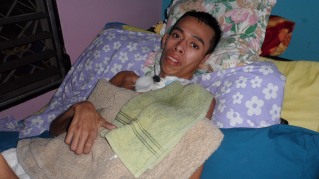 Earlier this year I had written about a young man named “Denis” who was suffering from Guillain-Barre Syndrome. Tom and I had been introduced to him last November and he was gravely ill at the time. GBS is a disorder in which your body’s immune system attacks your peripheral nervous system. It’s a rare disease which affects only 1-2 people in 100,000.

Prior to the onset of his illness, Denis was a healthy young man and avid soccer player. When he began exhibiting signs of tingling and weakness in his lower body and then life threatening complications of difficulty breathing and swallowing, he was hospitalized in Tegucigalpa.

Denis’ health was rapidly declining…the numbness and pain spread throughout his body. The doctors needed to perform a tracheostomy to lessen the work of breathing because his respiratory muscles were so weak. They also had to insert a feeding tube because he was unable to swallow.

Following his hospitalization, he returned home to his devoted mother and large support system of family and friends. Denis remained dependent on oxygen and required expensive medication. Although the family managed to raise some money, they fell short and turned to Esperanza for financial support.

Nine months past before I returned to see Denis and was thrilled to witness the improvement he had made! No longer was he lying in bed; he happily greeted me riding his bicycle! Denis continues with physical therapy, taking vitamins and actively trying to gain weight.

Although he isn’t back on the soccer field yet, I told him I expected to see him there when we return this fall. Best of luck with your continued recovery.