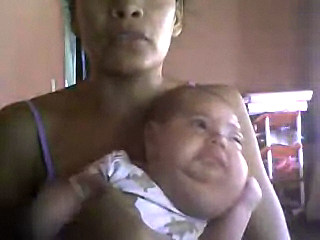 Yesterday I received  fantastic news from Mrs. Peggy Kipps of The Ruth Paz Foundation that the first step for obtaining life saving medicine for baby Ostin has been accomplished! Peggy gave the credit to her co-worker, Paola, who has been working tirelessly for the past several weeks with the foundation’s lawyers and goverment officials.

Ostin was born with a congenital malformation called a “lympangioma.” At birth it was only thumb size, but it grew at an alarming rate and doctors were concerned he would suffocate. Surgery was deemed too risky and the alternative treatment is to inject the area with a drug called “OK-432.” Unfortunately, it is not FDA approved in the U.S. and only available in Japan, South Korea and Taiwan.

The Honduran government has now agreed to allow the medication to be imported into their country, and the necessary permit will be provided to the drug company. This drug is very temperature sensitive and requires specific shipping requirements, and we anxiously await its safe arrival.

Thankfully, Ostin continues to hold his own and awaits at home with his worried family. Please hold Ostin in your thoughts and join us in waiting for hope.